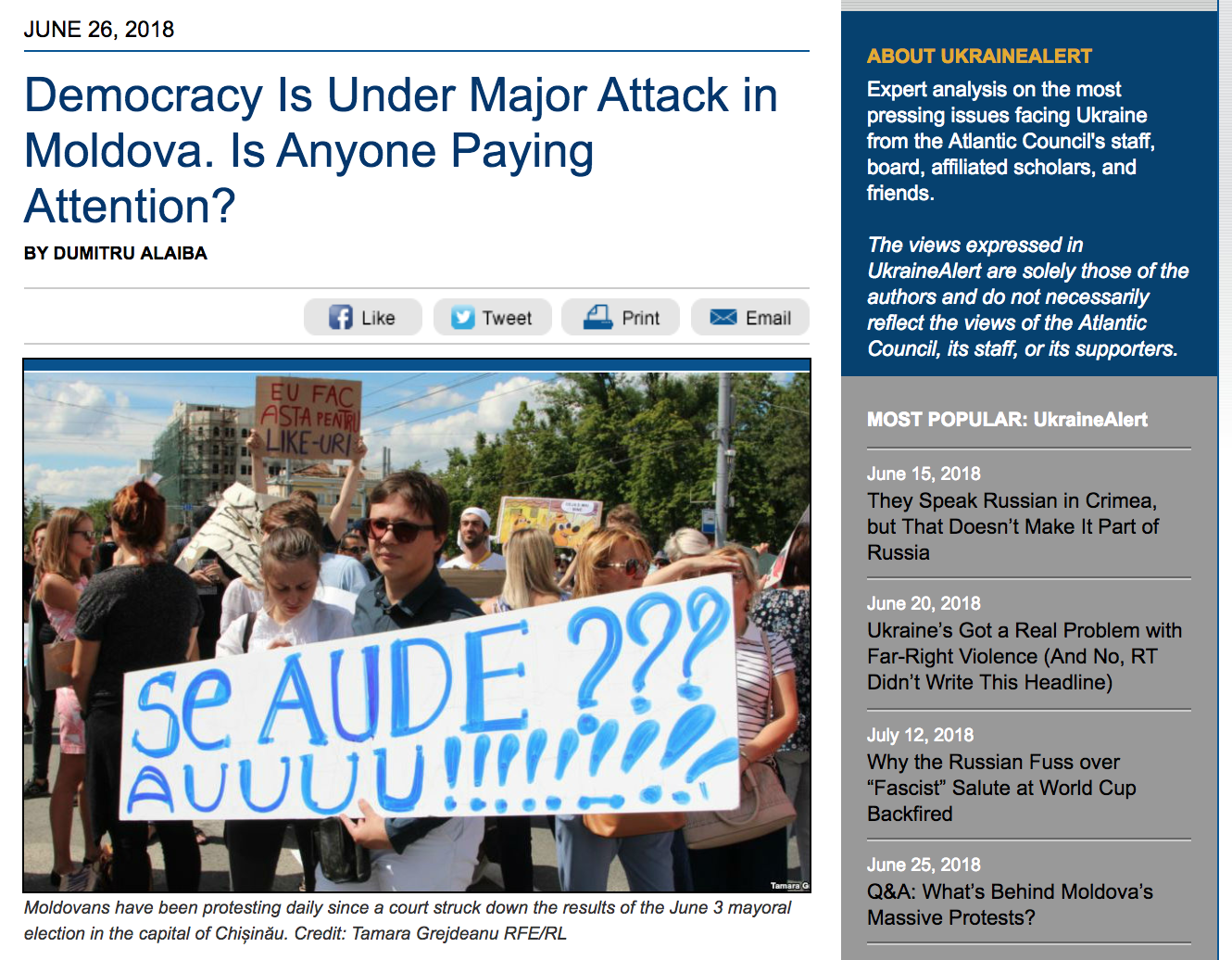 Last week a court in Moldova’s capital of Chișinău annulled the popular vote in local elections, which were won by pro-European opposition leader Andrei Năstase. The formal grounds for canceling the results are absurd; on election day the candidate urged people to vote on social media. This is no reason to block an elected official from taking office after the people have spoken.

On June 25, the Supreme Court of Justice upheld the ruling and its decision is ”final.” Until yesterday, Moldova was the only country in the former Soviet Union (except for the Baltic states) where all transfers of power had taken place democratically without the abuse of laws or institutions. Sadly this record was broken.

A long-awaited victory over a kleptocratic, nominally pro-European regime is being stolen from the people. The invalidation of the popular vote is just one step in an elaborate strategy to rob Moldovans of their fragile democracy.

The current government lacks the legitimacy that can only be obtained in elections. They never won any. This government was instituted in early 2016 with a breach of procedure and no public scrutiny by a parliamentary majority with over half of its members crossing the aisle on non-transparent conditions.

Last year, the parliament approved a controversial electoral reform that favors those in power. The expert opinions of the Venice Commission, local NGOs, and foreign partners warned against the law and were defied openly. Peaceful protests were ignored and their leaders ridiculed by pro-government politicians and their trolls. An illegitimate parliament approved an undemocratic electoral system.

When people decided to initiate a referendum to repeal this reform, the Central Electoral Commission blocked this basic democratic right without any serious grounds, and they did so twice.

Freedom of speech and media freedom are in free fall. Activists and civil society are being silenced one after another. Access to information is ever more difficult. Free media is microscopic and has to compete with a monopoly protected by the authorities.

Corruption is the root of it all. Today’s Moldova is a textbook example of how corruption can become a real threat to democracy.

The court system is broken. When a politically motivated court ruling annuls free and democratic elections, the people’s will is sacrificed and the last bridges of legitimacy are burnt between the government and the people.

Since $1 billion was looted from the National Bank of Moldova’s reserves and another $22 billion was laundered from Russia four years ago, Moldovans have been in protest mode. People are tired, and some are getting used to the idea they might have to live in a captured state. Some leave.

But peaceful protests will go on as long as it takes.

Regardless of the kangaroo trial this week, the pro-European opposition won and another strong leader emerged. Opposition parties feel momentum and must use this energy to keep pushing. Society feels that the oligarchic system is vulnerable and is acting this way out of weakness. This deeply unpopular government has nothing to lose and knows that it will never be liked or accepted by the people, and will never be able to restore its image which has been tainted by high-level corruption scandals.

A new, fresh protest movement seems to be on the rise. On June 24, thousands took to the streets. Peaceful protests are now permanent.

This, however, will not be enough.

The situation has degraded to an extent that it will not be fixed only with forces from the inside. Our friends must accept that tacitly supporting an oligarchic regime was bad policy, accept a part of the responsibility, and adjust. Geopolitics aside, Moldova’s democracy is under serious threat.

The West does have leverage since Moldova relies heavily on foreign aid. The United States, the European Union, the IMF, World Bank, and other donors must immediately freeze all funding then critically reassess every program. Our partners are supporting Moldova’s democratic reform, while our elites are fighting to destroy our democracy. This contradiction must be resolved. Funding schemes that fully bypass government mechanisms and directly address the population, entrepreneurs, and civil society must not suffer.

The situation in Chișinău is a clear abuse of democratic norms and sets a dangerous precedent for the upcoming parliamentary elections this fall. Under the new electoral system, we can expect similar invalidations in constituencies where the result is not the one desired by the government. The voting system that favors the corrupt elite must urgently be repealed. No money should come until our electoral system is fixed, and no excuses or explanations should be accepted. Personal sanctions against those who maintain state capture and fight against our democratic freedoms must be an option.

Our partners must not finance the consolidation of an autocracy on the EU’s and NATO’s border. It is against their long-term interests, and it is against the interests of all Moldovans.

Since the 1990s, Moldova has seen a generation of democratic development. Our vote was perhaps our only true achievement that stuck in the last quarter of a century. Our friends must not, under any circumstances, allow it to be stolen from us.

Dumitru Alaiba is an economist and serves as program director at CPR Moldova. He tweets @dumitru_alaiba.